A warm and windy spring-day outing to Pacific, Missouri…Pacific is not too far from Spy Garden, but very different from the area where we live. The first sight you see when entering Pacific on historic route 66 is the St. Peter’s Formation:

St. Peter’s Formation (and the sign for a car wash)

These huge rock formations with big, striking “caves” (really old mine entrances) have quite an unceremonious presence in Pacific. There are no signs, no information, no parking (we just parked on some gravel on a side road). I wasn’t quite sure we were even “allowed” to be walking around here!

I didn’t know it was even called “The St. Peter’s Formation” until I looked it up when we returned. I knew it was a part of an active mine because a bustling U.S. Silica plant sits right along route 66 just a few “blocks” (rock blocks? haha) beyond where these pictures were taken. Train tracks run right up to the plant and the sounds of train whistles and chug, chugging are steady.

We learned that U.S. Silica is mining “St. Peter Sandstone” and that…

Not a mile away, there is a little civil war memorial park that does have parking and signage/information. The description of Blackburn Park from Pacific’s website reads,

Home to Pacific’s Civil War replica cannon located on top of Sandstone mountain on 2nd Street off Osage. This is a breathtaking view of Meramec Valley and the civil war cannon are spectacular sites that you will never forget.

That’s a bit of an overstatement. It is a good vantage point, but I wouldn’t call it a mountain. Given, it was cloudy and the trees are still leafless, but still, this view of Pacific isn’t necessarily picturesque.

Though the Spy liked to see the… 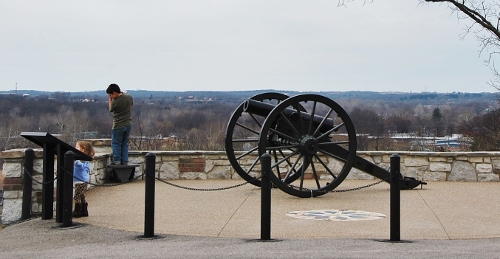 Plus it was VERY windy up there, which made it fun.

I was way more interested in getting a closer look at those huge rocks down the street!

Old mine entrances…and can you spy the Spy? 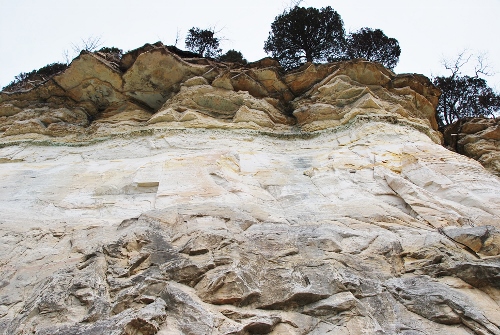 I don’t think we should stand under this over-hang! 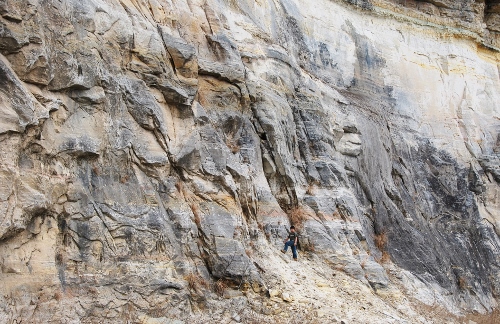 Can you spot him?

A tree in an old mine entrance, way up! 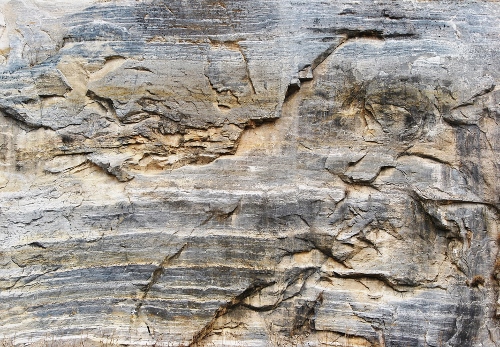 Our favorite part was this big sandy flat area below…Silica Valley, if you will. The kids collected rocks (never, ever underestimate the entertainment value of rocks!)

I liked these pretty little (tiny!) weeds growing in the sand.

It would be nice to go back on a day when the sky was a good clear vibrant blue (would make for an entirely different set of pictures), but I like how the gray/bright-white sky kind of gave everything a little bit of an otherworldly look today! Happy Friday everyone!

9 thoughts on “The St. Peter Formation”