These three things have pretty much nothing to do with one another. They were just a few new things I learned about so far this week and I wanted to share.

First, on the Cedar Waxwings…

This picture is on the back of Xplor, a free children’s magazine for kids in Missouri.

Here is a close-up of the “wax” on their wings (from the same magazine): 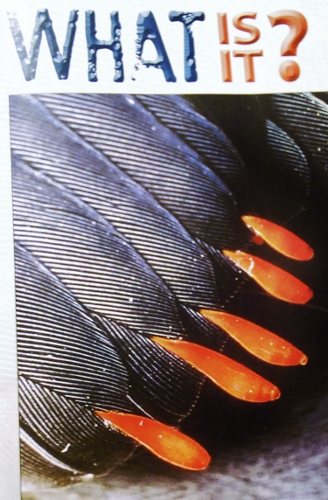 What most endears cedar waxwings to me is their habit of communal and cooperative eating. Instead of fighting for access to berry-laden branches, half a dozen waxwings perch side by side, daintily passing berries from beak to beak as the bird nearest the tip of the branch plucks them. It’s enough to make you reconsider standard notions about which species are most evolved.

The quote above is from an article by Jim Low, “Waxwing Birds Mean Waning Winter” (had to include the title because I love a good alliteration!) (click here to open the article in a new window)

We have several large cedar trees loaded with berries, so I really hope to catch a glimpse of these striking birds at some point this winter, or in spring when they migrate north. Mostly, I gravitate toward photographing plants. They stay nice and still and you can move in really close without scaring them away. Every once in awhile a spider or snake will stay still long enough for me to get some good shots: but I’ve never had much luck photographing birds, so just seeing a waxwing would do just fine.

I am not a hippie. I believe the words “green” and “natural” are thrown around FAR too often and I rarely believe packaging (honestly, if it’s IN a package/made in a factory, how “green” or “natural” is it really?) 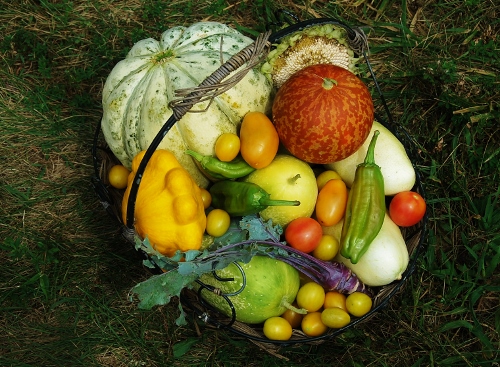 But of course, also, seasonal! But I digress…

I’m a skeptic and no matter what I hear or see or read, I usually believe it is false first (or at least contains some untruths) and then investigate further to see if there is any value. I usually estimate that anything being sold is 97% advertising and 3% truth hahaha. So I am often drawn to trying cheap/easy things that are not advertised at all.

A few days ago I came across designmom’s post about Oil Pulling.

Oil Pulling?! I’d never heard the term.
So basically it is taking a tablespoon of raw coconut oil, putting in your mouth and chewing it up until it dissolves (it’s a solid at room temperature). Then swishing it around for 20 minutes. TWENTY whole minutes. From the two posts I read (including this one) I’ve learned that oil pulling will: cure cavities and halitosis, replace brushing and flossing and may or may not turn you into a mermaid. Hahah

So again, I RARELY believe what I read (I mean I know you can trust everything on the internet but…;) However, I love to try something new (especially something as benign as swishing oil around your mouth) . It’s kind of like a risk-free adventure.

So the first time I did it, I thought it was weird. And basically thought “Yeah, not for me.” But then the next day I felt like doing it again. And I’ve done it twice a day ever since! So I’ve tried it before brushing or flossing and after flossed my teeth to see what was left and was really surprised to see that there was barely any plaque/stuff in between my teeth! Crazy! So on some level it does appear to work because my teeth feel awesome. And also appears to be a fun activity as the Spy, Smoochie and Spy Sister are all still doing it regularly too!

If you think about it, most toothpastes have glycerin. Glycerin is soap. Soap is made of fat.  And coconut oil is, indeed, fat. You’re just taking out the middle man. Or something like that.

Anyways, try it if you want a risk free adventure. We’re all still brushing and flossing in addition so its REALLY risk free;)

And the final “new exciting thing” this week…

We talked about the meaning of this word in (grown up) bible class after church this past Sunday. I found the meaning to be so hard to pin down.

Sanctify means to “make holy” (so sanctification is the act/process of becoming holy).

Here is what I do understand:

As a sinner, I am quite imperfect. I am “freed” of sin because (and ONLY because) of the sacrifice of Christ.

But God shows his love for us in that while we were still sinners, Christ died for us. (Romans 5:8)

Since I am so humbled by this sacrifice I am compelled and eager to do “good works”. So I’m not doing them because they “count” for anything.

Where I suppose it gets complex is the idea of “becoming holy”. I certainly don’t feel holy, I feel humbled.

Sanctify them in the truth; your word is truth. As you sent me into the world, so I have sent them into the world. And for their sake I consecrate myself, that they also may be sanctified in truth. (John 17:17-19)

What does the term “sanctification” mean to you?

Unrelated to the waxwings, oil pulling or sanctification, here are some snow day pictures from today (taken by Aunt Spy): 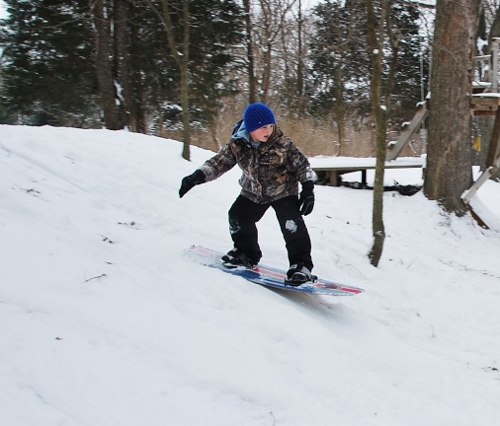 Hitting the slopes in our backyard 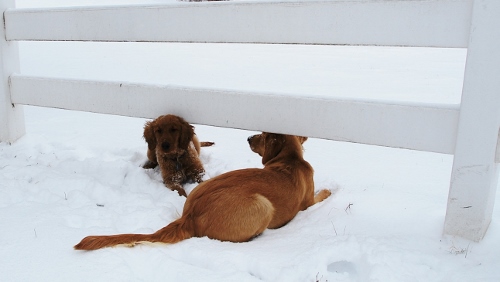 Important dog meeting under the fence

Water color design by the Spy