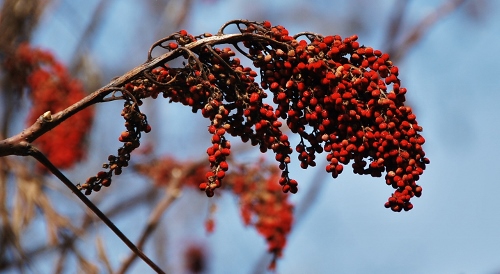 Staghorn Sumac: good name. eh? I try never to get my information from Wikipedia. Because can’t people post Wikiwhatever they want on there? I guess I use it sometimes. But I don’t like it or really trust it. Ohio State University is a great resource for clear, concise descriptions when you are trying to identify a plant. And so…on Staghorn Sumac:

Staghorn sumac is a native of eastern U.S. with a current range extending north to Quebec, south to Georgia, and as far west as Iowa…  (source)

I’ve heard of sumac being used in Middle Eastern cuisine. And by “I’ve heard” I mean, I read that and saw this picture on Wikipedia: 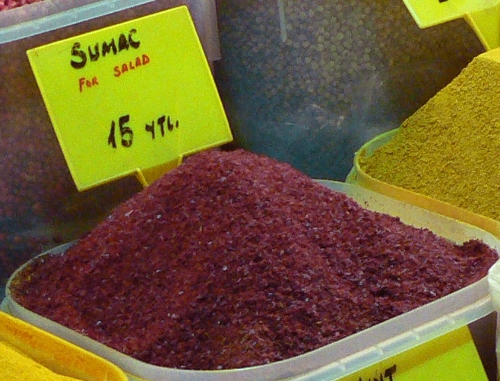 Apparently, the berries can be ground to add a tart, lemon flavor to dishes and drinks. Here are a couple of interesting articles I found on foraging and consuming sumac:

The berries can also be used to make a natural dye…Do I feel another foray into the world of natural ink-making coming on? 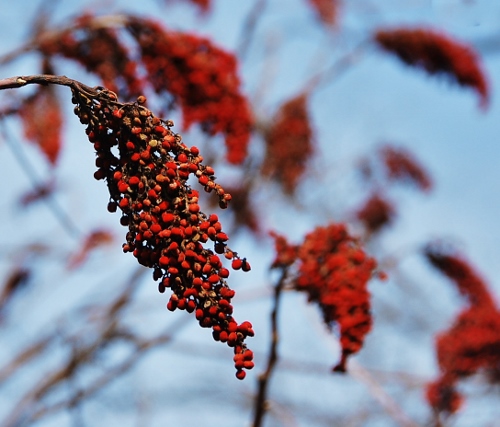 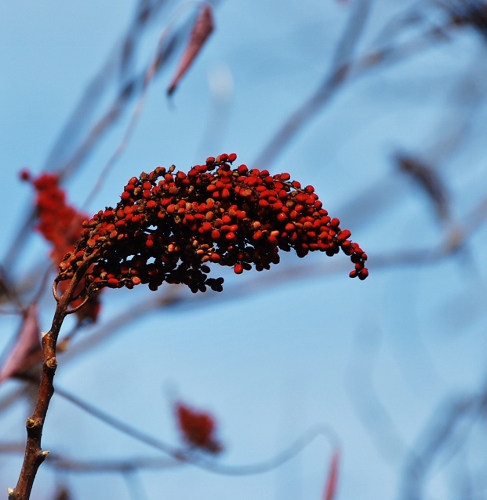 Nah, the photographs of the red seed heads are so much tidier than a batch of red ink. But I am tempted to see how lemon-y they really taste. Because I love lemons and tart things. However, I don’t have much incentive to forage for tartness as I happen to have an abundance of my very own, homegrown Meyer lemons at the moment. 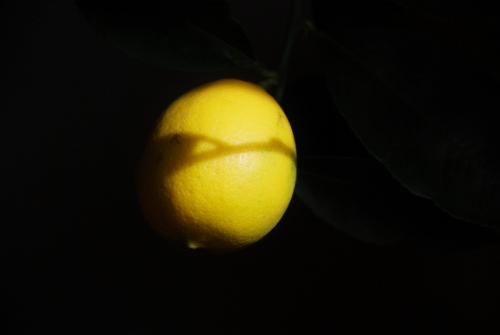 They basically taste like regular lemons. Except 700 times better since I grew them myself. And for the record, they do seem more juicy than store-bought. I brought the little tree inside several weeks ago and I’m pleased neither baby nor puppy have destroyed it. 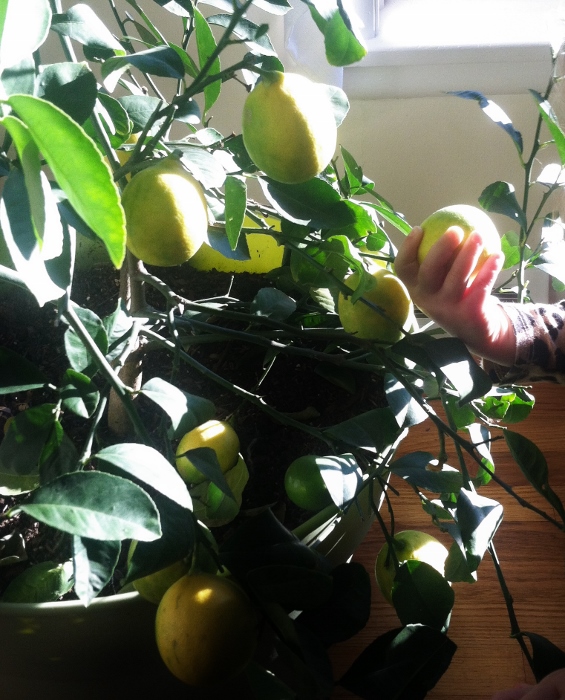 Completely unrelated (the “and Friends” portion of this post)… I found these two egg substitute ideas on www.heirloomgirl.com and found them useful (as both ingredients are staples in my kitchen). I add them both to bread, pizza dough, cookies, etc. but I never thought of using them specifically as an egg substitute:

…works great as an egg substitute. To simulate one egg mix together 1 tablespoon flax seed meal to 3 tablespoons water. Let it sit for a few minutes and then add to your favorite recipe. (If the recipe is cooked you will loose the benefits of the Omega-3 but still have extra fiber.)

Chia seeds pack a lot of punch in a tiny package. These seeds contain Omega-3 fatty acid, magnesium, zinc, niacin, iron, copper, antioxidants and more. They can also be used as a great egg substitute. To simulate 1 egg, simply mix 1 tablespoon ground chia seed to 3 tablespoons water and let rest until it forms into a gel-like substance (about 5 minutes). Then add it to your recipe. (source)

Obviously these egg substitutes were meant for baking. Don’t try to make two eggs over-easy with chia seeds. Or flax-seeds sunny side up. HAhahahHAHAHA