Today was a retina-searingly gorgeous day. Crisp and perfectly clear: I love October! 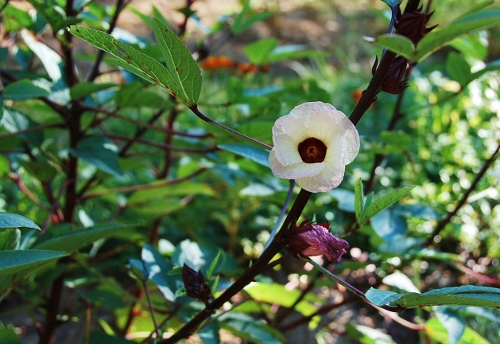 The lighting was finally ideal to capture this awesome plant in its full glory!

A closer look at a bloom

The buds are so shiny and deep red: 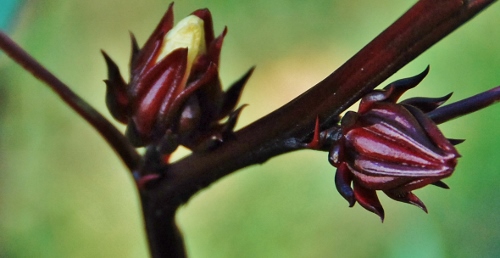 They remind me of intricately shaped gummy fruit snacks. The “Spy” agreed with me and was willing to give them a taste:

We tried them. They are chewy and sour, much like a fruit snack! They need a bit of sweetening and then they would be the ultimate natural sour snack! I really need to take advantage of this plant because it is full of tart flavor (both the leaves and the buds). More blooms abound elsewhere in the garden: 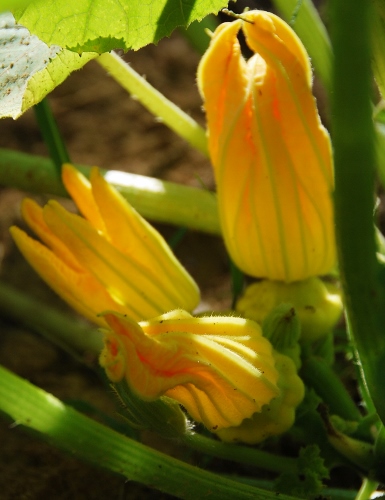 And lots of white blooms and new fruits are still appearing on the Serpente di Sicilia edible gourds on the teepee:

Teepee (half of it anyways)

Looking up at the top of the teepee

And digging in another spot

There are lots of plant-less patches of dirt for her to practice her digging (and thankfully she seems to stick to the “plant-less” areas!)

Tall sorghum (and look at that blue sky!)

I was looking in the area where I pulled up some purple cauliflower plants (they had been eaten by cutworms) and I saw this: 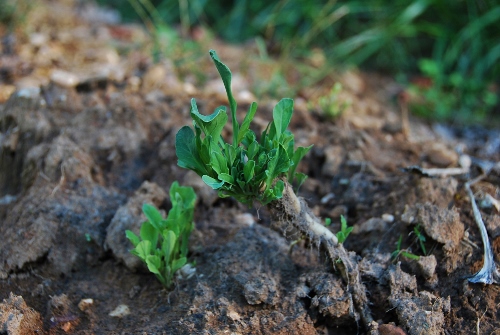 Cauliflower sprouting up from some of the roots I missed!

If I had known the cauliflower would grow from the roots I would’ve just cut the plants at the base, but this is the next best thing!

What do you see?

But this was one of my favorite sights from today and tells so much about a garden in fall. The little green sprout in the left corner is a clove of garlic that somehow dropped to that spot and is happily growing. The shriveled slightly reddish things in the middle are lemon cucumbers that I had picked and left sitting there. They’ve dried up, the seeds have matured and fallen out (can you spot the seeds?) Nature is such a good seed-saver and will do all the work for you a lot of the times! In the top of the picture is a mass of clover. It is just regular clover, but this particular mass has lots of purple tones. Even though clover is a “weed” it is edible (and tastes lemony) and is also a perfect thing for “green manure”. At the end of the season I just let the clover grow wherever it appears in the garden. Then at some point (fall, winter or even the following spring) dig it up and till it into the soil and it adds organic matter to your garden. 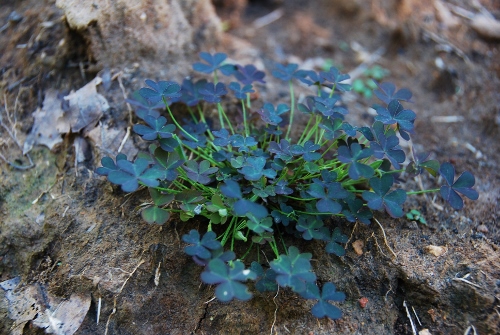 There are so many interesting plants that grow wild. I’ve said before I cannot even begin to understand why people would use chemicals to try and kill dandelions or clover (and whatever other “weeds”) just so their lawn would be one type of grass. I don’t use anything like that and let weeds grow freely and try to appreciate every little variation in our grass. And this approach still yields a very green lawn:

I also like the grassy paths between the garden. Nothing like the feeling of cold fall grass between your toes!

Closer to the treeline (we have a small patch of woods in our backyard) the ground yields more interesting sights:

Here is a spiky weed I spotted at the treeline.

Thanks to Eliza Waters for identifying this thorny weed as a thistle. I didn’t recognize it without the purple flower (they are very common and invasive around here). She also identified the plant below as white snakeroot and shared this link. 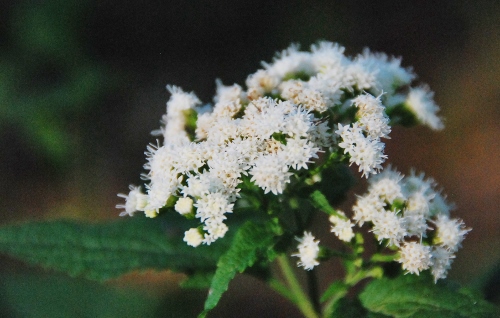 Here is an interesting story about white snakeroot:

Leaves and stems of white snakeroot plants contain tremetol, which is extremely poisonous. The plant is unpalatable to animals, but they will consume it if other forage is scarce. If sufficient amounts of white snakeroot are consumed, animals develop a condition known as ”trembles” that may cause death. Lactating animals excrete the toxin in their milk, which can then pass to humans drinking the milk. The condition produced, known as “milk sickness”, was common in early colonial times. A great milk sickness epidemic occurred in local areas of the eastern U.S. in the early nineteenth century resulting in many deaths. Abraham Lincoln’s mother, Nancy Hanks Lincoln, was among those who died. Eventually, the toxin in white snakeroot was identified as the cause. The condition is rare today because it is common to pool milk from different areas and herds for commercial production thereby diluting any tremetol present. Meat of animals that eat white snakeroot can also contain tremetol at levels toxic to humans consuming it. Dried plants in hay are toxic but not as poisonous as fresh plants. (source)

I will be weeding both of these two little plants! Thanks again for the info! 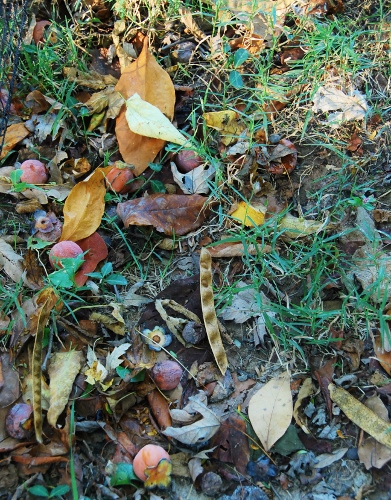 Persimmons and seed pods and leaves! 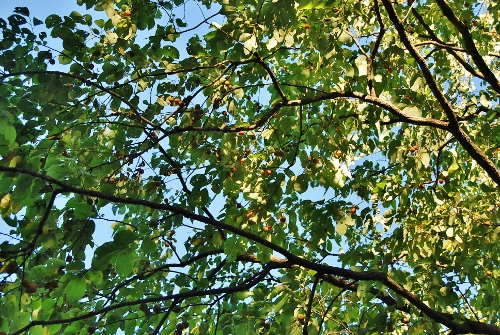 This persimmon tree is loaded with fruit but is about 50′ tall! So you can’t reach most of them.

The persimmons that fall to the ground are mushy and ripe so we pick the best of the fallen and enjoy those! Here the “Spy” is showing what the seeds look like when they still have pulp attached:

Click here to read about how persimmon seeds can forecast the winter weather! 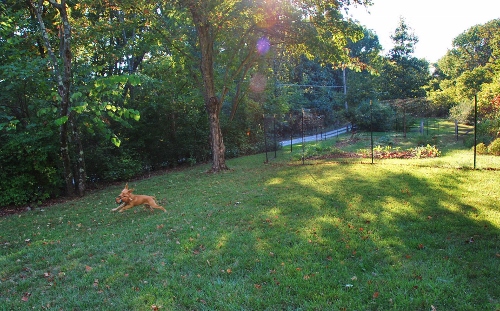 Puppy frolicking with a stuffed animal in her mouth

Those lime green things are called hedgeapples (also called “osage oranges”). They are not edible, and are made of this squishy white sap that looks like elmer’s glue. They smell like an apple and supposedly keep spiders away! Some people put them around their house for this purpose. I happen to like spiders and we don’t have a major spider issue in our home so I just use them for decoration ahaha. I like how in the above picture the deer fence in the background looks like little lights. Love that late afternoon fall sun!