Here’s a picture of my tiny gardener learning about plants:

It would first appear she has a black thumb. After all, she is breaking plants apart and tearing the leaves to pieces. However, I would argue she has more gardening experience and understanding than most. Because she knows the number one most important thing about gardening. Here it is (along with a couple of other tips):

1. Don’t be afraid of killing plants. For each of the plants thriving in Spy Garden, two (or maybe more) are looking down from plant heaven. Cutworms have eaten my cauliflower plants, flea beetles have gnawed up my eggplants. And all my marigolds planted in two large planters have been destroyed by baby. I tried growing three different varieties of eggplants this year: started the seedlings indoors in February. Still not an eggplant in sight. Does this mean I will never try growing cauliflower or eggplants again? No! Don’t get frustrated when you kill plants. And if you are gardening with kids, don’t get mad at them when they (perhaps more swiftly) kill your plants. Encourage them to pick the red tomatoes (vs. the green ones) and be gentle in the garden but if they rip a bean plant out of the ground, let it go. I mean, I wouldn’t encourage pure destruction, but a broken stem or some torn leaves are small sacrifices in cultivating (pun intended) a love of plants.

2. No matter how much you learn about gardening (from books, online articles, etc.) the bulk of the learning must take place in the actual garden. Every plot of soil and site is different and a plant that will thrive in one garden, may do poorly in another. Even in the same town! Every season is also different, so if a particular variety doesn’t do well one year, don’t be afraid to try it again. Don’t focus too much on searching for “how to” advice on gardening, and just experiment.

3. Grow the things that you can’t kill. Asparagus and strawberries are very low maintenance perennials. Mint, catnip and thyme are great choices. Even if you don’t use the herbs you grow (and I definitely confess on this point that I don’t harvest and use my herbs nearly as much as I should) having something green and thriving in your garden will get you more excited about gardening. So it’s not about whether or not you like mint in cooking. Just grow mint, because it will grow. In addition to growing “things you can’t kill” also try growing lots of different things (as much as you have room for). Squash may be devoured by squash bugs one year that your tomatoes are beefy and prolific. Beans may be doing awesome when your lettuce is burnt to a crisp. Even though starting plants from seeds is a bit more work, it is a LOT cheaper, and if you are following rule #1, you don’t want your sacrifices to be expensive exotic specimens from a designer nursery. Plus with seeds you get a ton more plants (and because of the law of attrition (#1!) this is a great thing!

Planning for next spring’s garden starts now! So if you’ve ever toyed with the idea of growing something but convinced yourself you have a black thumb, just remember rule number one!

I didn’t forget about How to Crochet a Hat: Phase II. I was just giving people an extra day to gather supplies (a crochet hook and yarn). So here it is!

You’ve made a little circle and tied a knot. 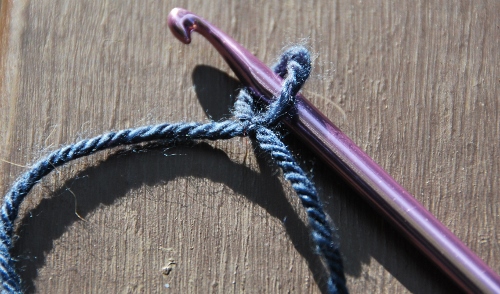 This circle is going to be the center/top of the hat.

Now we are going to do some crochet stitches around the circle.

Doing this while taking pictures of each step is a little more challenging that I thought, and these pictures may be a bit hard to follow but I’m taking it sloooow, trying to show each move. So bear with me, YOU CAN DO IT!

Slide the hook back down through the hole bringing the piece you just layed over the hook with it. This picture is shown of after pulling it through and he the hook is off to the side.

Now put the hook back through the hole

Coming from behind and from the left put the piece of yarn over the hook again (same way you did in the first picture). Then pull that piece through:

Now it will look like this. You are halfway through the first stitch!

In the picture above the piece of yarn has already been draped over (from the left) the hook. Grab that piece with the hook and bring it through the two loops on the hook:

Now put the hook back through the hole. The yarn piece on the right is going to go behind the hook and over the hook coming from the left. Grab it with the hook and then pull it through.

Again, bring the yarn through the two loops on the hook. 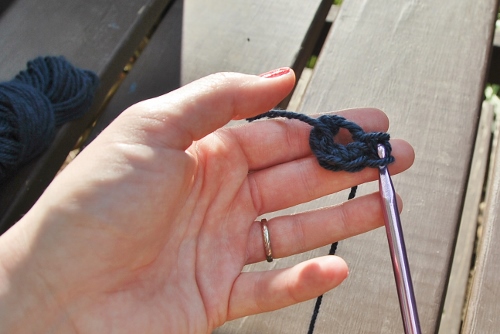 Another stitch complete…now go back through the center of the hole again and again.

About seven stitches. Until you have this:

The top of the hat!

Now we need to take a break or my head is going to explode. Trying to show and describe this is harder than I thought! And after re-reading my instructions while looking at the pictures, I think your head might explode.

In knitting, sewing or crocheting I have never followed a pattern or counted stitches. In the same way I am not too fond of recipes (because they are too bossy) I feel the same way about sewing, knitting or crocheting patterns. If I am going to go to the trouble of sewing or crocheting something, it is going to be something 100% original, not some pattern someone else made up. Plus, counting stitches sounds tedious and boring. Crocheting should be a mindless activity where you can watch tv or chit chat. At least that’s how I do it. And I don’t know how to make frilly detailed throws with intricate patterns. And I only know one crochet stitch. But that’s ok.

So basically phase 2 of making a hat is getting some stitches (I did seven but it could be more or less). Around the ring. When you get back to where you started making stitches just stop and wait for phase 3. Or unravel it and do it again for practice. Or try making a different type of stitch around the circle. Or keep going if you don’t feel like waiting. While I was trying to type out the instructions, the Spy picked up the little yarn ring and I showed him how to do the stitches in about five minutes. And he is eight. So it’s really not that hard. Just play with it a little bit. We’re not talking about a big time commitment. And if you follow along with this hat making lesson you will basically be able to crochet anything. I’ve made baby booties and these cool looking crocheted kid slippers using this same method.

Sometimes I feel like people get turned off by knitting or sewing or crocheting because most of the tutorials out there are so strict and specific and BOSSY! So I guess I’m hoping my more vague instructions are a bit more approachable. And by “approachable” I mean “extremely confusing”. But I tried! And in phase three I will try and nail down the stitch with more play by play photos (and action shots) haha!

So if you still haven’t gotten the crochet hook and yarn, there’s still time to catch up! If there is some type of apocalypse and you are wanting a toasty hat with a pom pom you’ll be glad you learned!