I added a beet to the water for fun: since they are “violet” artichokes and the beet turns the water purple! You can snip the prickly tips off of the artichoke “leaves” but I just left them on. I boiled them for a while (about 20 minutes). They did not keep their color and turned the green of a “regular” artichoke (the water and beet stayed bright). Then we picked the leaves and bit the “meat” off the base of each one. After you pick all the leaves off you scoop out the choke (these were small and tender enough you could easily do this with your finger) then eat the heart, which the Spy loved! We ate them sans salt, pepper,  lemon juice or butter. All of those things would’ve been great and there is a lot you could do with the hearts but this was our first time eating them fresh and we had only picked four so we just ate them as is. They are very flavorful and delicious with absolutely nothing added.

These are three of the ones we picked.

And the fourth. It looks like it is doing a yoga pose! 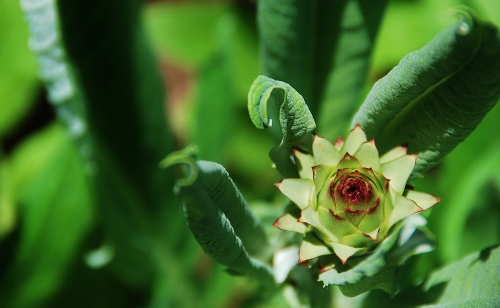 This one looks a bit different from the others

They are very large plants for somewhat small artichokes but after eating them I’m ok with that!

Click here to see these artichoke plants in February 2013!

A few other garden sights from today:

Red Romaine in the lettuce patch

The colorful lettuce patch has yielded large salads every day for weeks!

The spinach is starting to bolt but there are still lots of leaves to eat.

The pepper plants are FINALLY starting to grow. They were off to a slow start but are making progress. All of the garlic scapes I cut and put around the plants to ward off bugs have continued to develop and I was surprised to see they are forming the garlic mini-bulb seeds. I thought I was sacrificing these seeds when I cut the scapes when they were pretty small/immature (before these seeds had even begun to form) but they’ve continued to grow and form the bulbs despite being cut from the plant!

I don’t really do anything with the lemon bee balm. It is very strongly scented and medicinal tasting. I planted it for its good looks and to attract pollinators. The lemon bee balm plants growing now are volunteers from last years plants (I planted the seeds in 2012).